Back to my Trance and Ecstacy page

In many cases, my trance work has been conducted in a religious context. I hold full ADF-style solitary rites every week in addition to my public duties. And in these solitary rites I usually meditate, do divination and go into a trance for various purposes: sometimes for performing magic, sometimes for divination using postures, sometimes for bardic inspiration, and sometimes just for the hell of it. Occasionally, however, I may go into trance for totally non-religious reasons and end up with a religious experience anyway! Below are a few of my stories. Some are links to stories on this page, and others link to other pages.

My First Vision of Divinity

Back in the spring of 2001 I was participating in a body-stress type of primal practice. I had not fully learned meditation at this point, and had only barely decided to return to Paganism. The practice I was doing was very intense - far more intense than I had ever done before. I gave into the flood on endorphins coursing through my body, and felt myself go deeper and deeper into some reality different from that of my more usual day-to-day variety.

Suddenly, I felt as though the sky opened. I was keenly aware of the singing of birds all around me - a singing that I did not recognize. Then I realized that there was a beautiful Lady at my left side. She wore a long dress and had long, dark hair. She smiled sweetly but knowingly at me. And I had no idea of who She was (though I suspected She was a spirit of some sort). Then, on my right, I sensed another presence. A large, naked man was standing there, and he had antlers on his head! Now, I KNEW who that was. So the Lady must be a Goddess. What was going on? What was happening to me. I suddenly became aware that the whole room was full of entities. I didn't know (then) who they were, but I felt awe and Their majesty fill me up completely. After a time that seemed endless and yet all too short, They faded away, and the next day I went in search of books to explain who They all were. The Lady was Rhiannon, my Patron Goddess. The Man was Cernunnos, my Patron God. Other Deities that I saw that night included Taranis, Lleu Llaw Gyffes, Manannan mac Lir and the Morrigan.

Dancing with the Morrigan

That first night, the Morrigan stood with Her back to me. At one point I remember she looked over her shoulder at me and said, "You're not ready for Me yet." Simple as that. Of course, at the time, I wasn't sure who she was. 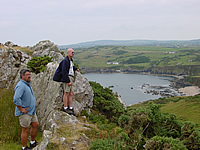 Later that summer, on a trip to Wales, we visited a place called Dinas Gynfor, or "Hell's Mouth," on the coast of the Isle of Mona (Anglessy). A local witch had told us that this was the site of the Druid's last stand. Well, there isn't any mention in the Roman sources of where on the island that might have been, and could be just a wild flight of fancy. But the place was forbidding enough - wild, rocky, windswept terrain with rugged hills and the ocean crashing at our feet. I did a short ritual there and sat for meditation. Instead of meditating, though, I must have gone into trance, because I was suddenly aware of a woman standing on the next hill over, staring at me. She looked much as the Morrigan did that first night, and I could see the wind pulling at her hair and dress. The vision soon faded, and I felt a bit worried. I hoped that She would stop seeing me!

Then, on the night of September 10, 2001, I was at an event participating in that same primal practice. And I just couldn't relax into it. I felt like I was up against a wall of some kind. Finally, I let go and sailed deeply within myself, only to be confronted with the sound of wild laughter. Opening my eyes, I saw the Morrigan once again, standing in front of me and laughing maniacally. It wasn't until the next morning that I found out what it was She was telling me.

The Way of the Shaman

Fairly early on in my spiritual journey, I read Michael Harner's book, Way of the Shaman, and found it quite interesting. Interesting enough to contact his Foundation for Shamanic Studies and take their beginners class. Harner's technique is called 'Core Shamanism'. A few years later, a friend of mine and I attended a two-week Shamanic Intensive, which was wonderful and grueling at the same time. We covered soul retrieval, extractions, spirit journeys of all sorts and had eye opening experiences.

One thing that really makes Core Shamanism work for me is the similarity between shamanic cosmology and that of ADF. Core Shamanism has a Lower World, Middle World and Upper World, which easily correspond with ADF's Underworld, Midworld and the Heavens. At this workshop, I found easy entries, in trance to the sound of drumming, to both the Upper and Lower Worlds. I best enter the Upper World by climbing one of Tucson's gorgeous rainbows and the Lower World either through the cave under Carreg Cennen Castle in South Wales or by diving into the pond at the retreat center that the course was held at.

In the Lower World, I often encountered Cernunnos, Lord of the Dead, in His Throne Room. As I already have a relationship with Him (as my Patron), I can enter unafraid. He has been very helpful to me when I go there for soul retrievals.

In the Upper World, the Deities I have encountered have been Taranis and Brigit. Both have also been helpful. I'm glad I make sacrifice to them often.

My totem animals (or familiars or fetches or Patron Nature Spirits) are three. The main one that I have known for some time now is a black jaguar that first came to me during one of those primal scenes I do occasionally. Actually, he didn't come to me - rather I shapechanged into him! Growls and howls and all. We've become really close over the years, and I know his name, but it isn't spellable. The other two totem animals are Horse and Eagle. While I'm not as close to them as I am to Jaguar, they can still be of enormous help, especially when traveling in the Middle World. (I have close relationships with two Deities associated with horses and eagles - Rhiannon and Lleu Llaw Gyffes. Sometimes I wonder of these two totems might actually be my Gods in disguise...)