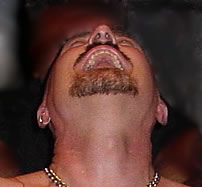 Just what is trance? What is ecstacy? How do they fit into a person's spiritual practice? These are questions that I hear all the time, though many Pagans do seem to have experienced them at some time or other. I suspect that this may be due to a willingness to look at the universe in unconventional ways. Heck, to even consider Paganism is to look at life unconventionally!

The links below will take you to various parts of this page as well as other pages.

For ADF members, there is an excellent article on ecstatic trance by Linda Costello that is worth reading. It's on the members-only part of the ADF web site.

To my mind, there is a difference between trance and meditation. Trance is (for me) a letting go, a merging with the Otherworlds in an unfocused (even if disciplined) way. It is an altered state of consciousness where awareness of external stimuli is reduced and the awareness of internal mental and spritual stimuli is heightened. In a trance, anything can happen - visions can occur, messages from Otherworldly spirits can be received, knowings can be had.

Meditation, on the other hand, is an extremely focused practice, where the mind is concentrated on a single experience, idea or chant, with the avowed purpose of forcing the ego to retreat and allow one to exist for a time totally in the present, in a state of conscious silence. Here, internal stimuli are reduced and the external ones increased. For me, trance can easily come out of meditation, though the reverse seems to be much more difficult.

Ecstacy, unlike trance and meditation, is not a practice. Rather, it is a specific state of consciousness that may be achieved through some forms of trance. It is commonly thought to be an intense, euphoric state, which is can be (see my photo above), but it also denotes an awareness of our interior landscape, of those areas normally not accessible to us that can have a spiritual dimension.

So how does one enter trance states? With practice, they can be willed. But there are external practices which can facilitate these states. One of the most common methods used by Neopagans today is through sonic driving. But there are many other forms of "driving" a trance state, and all have been in use for eons. All the senses can participate here, hearing, feeling (including movement), seeing, smelling, etc. Some can be more effective (for me, at least) than others. But often these techniques can be combined to great effect.

Here repetitive, rhythmic stimuli are used to cause trance. Some call this auditory driving. Drumming is one of the most common practices. Modern dance music, played loud, can also have the same effect, as anyone who has ever frequented dance clubs can tell you.

Ancient shamans used drumming to help them cross into the Otherworlds on their errands of healing. Modern shamanic practice still uses drums. Michael Harner's Core Shamanism practice requires the use of drums, either live or on tape. Anthropologist Felicitas Goodman also discovered that drumming was effective in allowing her various 'postures' to work for spiritual purposes. Other forms of sonic driving include chanting and singing.

I used to call this 'movement' but have taken the clinical name now because it can involve so much more than that. Dance is one of the primary forms of kinesthetic driving, used by Pagans everywhere. One famous Islamic sect, the Sufi's, have a well known branch called the 'Whirling Dervishes' who use dance as a 'remembrance of God' creating ecstatic trance states. (see photos here). Other forms include yoga and breathwork (counting the breaths, for example), and here I would also place primal, body-stress ecstatic practices.

Note: ADF neither promotes nor recommends body-stress practices. For more information on these things, go to my "Ecstatic Practices" link on the home page.